In addition to the physical evidence of a collision damaged vehicle and the crash scene, a tool is now available to download irrefutable evidence from a vehicle as to what the car and, importantly, its driver and passengers were doing in the 5 seconds leading up to a trigger event which usually is a crash.  This data has always been elusive to claims and collision investigators until now.

Together with those 5 seconds of pre-crash data, that recorded during the crash pulse which lasts only milliseconds and the following milliseconds thereafter can be harvested from a vehicle’s Event Data Recorder (EDR).

There are very few Technicians & Analysts who are trained, certified & licensed by Bosch to harvest and analyse such data using the world leading CDR Can-Plus & 900 systems by Bosch who are a Tier 1 OEM. 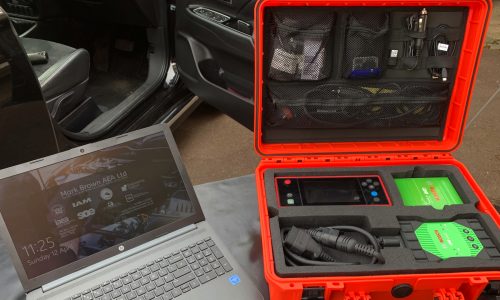 The data can only be reliably used if correctly downloaded by a  Bosch approved & certified Technician and interpreted properly by one of their expert Analysts because only they can really understand how, when and in what order the data is recorded which is crucial in collision investigation such is the sophisticated level of the equipment and the data it produces which is complex in its nature & content.

The data has been trusted internationally by law enforcement, crash researchers, auto manufacturers and government agencies who access EDR information on a wide range of passenger cars, light trucks and SUVs using this equipment.

This first case study is one published on YouTube by Crash Data Group which demonstrates perfectly the value in EDR read form a vehicle to the claims process and the determination of liability arising from the occurrence of an accident.

This is a study of one of my own cases where a claim was made by somebody who would have an insurer believe he was the “innocent” motorist whose car was struck in the rear by their apparently negligent and so at-fault Policyholder.

The struck vehicle was damaged to the extent it was un-roadworthy and was written off.

Added to the car’s write-off value, costs were claimed for its recovery and for storing it whilst the claim was being processed.

Replacement hire costs and perhaps inevitably the value of a whiplash claim were also claimed.

There were no independent witnesses or dash-cam footage to support either driver’s differing version of events.

One claimed his car was just struck in the rear whilst driving normally and the other alleged the car in front induced the accident in the sort of staged collision that has become known and referred to as a “slam-on”.

Normally at law there is no defence for striking another vehicle in the rear and it is the driver of the bullet vehicle who would nearly always be judged to be the party at fault for the accident.

I was engaged to forensically examine the vehicles.

It was compatible with a collision between the vehicles although could have been consistent with either version of events which didn’t help.

However, the data downloaded by the Bosch CDR proved the driver who initially appeared the innocent party in the collision under investigation was, in fact, out that day to induce a collision and had tried to do so a number of times.

I was able to prove without doubt using the EDR data that the driver slammed on his brakes a number of times at different times that day until somebody eventually collided into the rear of his vehicle.

Therefore, the Policyholder’s allegation of an induced “slam-on” collision was proved the more likely on evidence which otherwise would not have been available and the result was that the initial decision on liability was reversed resulting in a massive saving in claim costs.

Any cookies that may not be particularly necessary for the website to function and is used specifically to collect user personal data via analytics, ads, other embedded contents are termed as non-necessary cookies. It is mandatory to procure user consent prior to running these cookies on your website.